The Adrenal Glands are a pair of small endocrine glands located on top of the kidneys. Microscopically, these glands can be divided into two sections: the inner (medulla) and outer sections (cortex). The main hormones released are stress related hormones (cortisol, noradrenaline and adrenaline), hormones that regulate metabolism, hormones that affect immune system function, androgens (sex hormones) and hormones for saltwater balance (aldosterone). These hormones are necessary for the proper function of the body. Similar to other endocrine glands in the body, the adrenal glands receive rich aortic blood from at least three different sources, and have only one central vein. 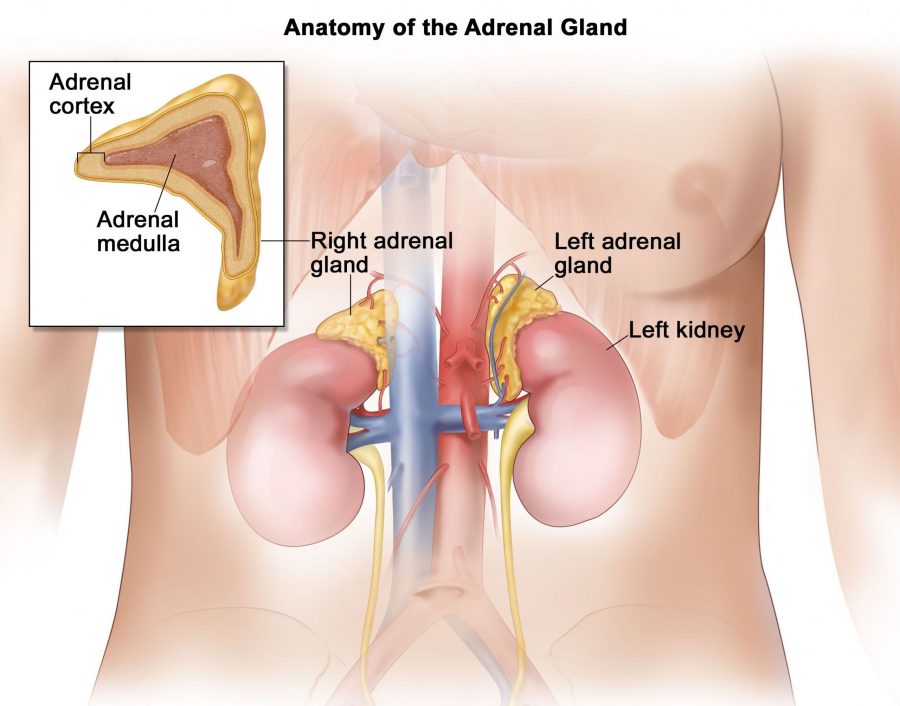 Adrenalectomy is mainly performed to treat tumors or excessive activity in the adrenal gland. The laparoscopic procedure has replaced open surgery, and is considered the preferred approach for these types of procedures. An adrenalectomy of only one of the adrenal glands generally does not create hormonal insufficiency, as the second gland will physiologically grow to accommodate the body’s needs. In certain cases, it takes time for the adrenal gland to grow, and during that time, the patient can take prescribed medication. However, if both adrenal glands need to be removed, the patient will need to be on hormonal treatment and medication for the rest of her/his live.

Adrenal phaeochromocytomas and extra-adrenal paragangliomas (PGL) have an incidence of 2-8 cases/million per year. The majority of phaeochromocytomas are sporadic but up to 30% can be hereditary and maybe associated with other endocrine problems. The classical symptom triad consists of episodic palpitations, headaches and sweating. Pallor, nausea and panic attacks are other less common symptoms.

A careful endocrine and family history is paramount when assessing patients with suspected pheochromocytoma or PGL. Screening tests for biochemical diagnosis include 24hours urinary metanephrines and plasma free metanephrines. Appropriate imaging includes a CT adrenal scan while a baseline MIBG scan should be considered to assess/confirm avidity of the primary lesion and to exclude extra-adrenal disease.

Functional pheochromocytomas and PGLs require pharmaceutical management and preoperative preparation for at least 2 to 3 weeks pre-operatively. This includes administration of an alpha blocking agent (phenoxybenzamine or doxazosin) and fluids followed by beta blocker agent (propranolol) where indicated.

Dr Papoulas and his team have great experience treating those patients. Dr Papoulas performs this operation laparoscopically via 3 or 4 tiny incisions. Most patients only require 1 or 2 days of hospital stay.

The treatment for hyperaldosteronism depends on the underlying cause. In patients with a single benign tumor (adenoma),surgical removal (adrenalectomy) is curative. This operation is usually performed laparoscopically. After successful adrenalectomy, approximately 95% of patients notice significant improvement in their hypertension. For patients with bilateral hyperplasia, the best treatment is a medication called an aldosterone-antagonist (spironolactone, eplerenone) which blocks the effect of aldosterone. In addition, patients are maintained on a low salt diet.

Without proper treatment, patients with hyperaldosteronism often suffer from poorly controlled high blood pressure and are at increased risk for heart attacks, heart failure, strokes, kidney failure, and early death. However, with appropriate treatment, this disease is treatable and has an excellent prognosis. Patients with difficult to control or long-standing hypertension should be screened for primary hyperaldosteronism.

Cushing’s syndrome is a disease in which the body makes too much cortisol. Cortisol is a steroid that is made by the adrenal glands. Cortisol is necessary for daily life and helps the body respond to stressful events, regulates the sleep-wake cycles, and helps regulate the body’s response to inflammation. A special part of the brain called the pituitary makes a hormone called adrenocorticotrophic hormone (ACTH) that controls the release of cortisol from the adrenal glands. Although cortisol is essential to life, constantly high levels of cortisol can damage the entire body.

The main causes of Cushing’s syndrome are ACTH-dependent disease (when the body makes too much ACTH which in turn increases the cortisol production), ACTH-independent disease (when the adrenal is making too much cortisol and the ACTH is therefore low), and iatrogenic disease (when the patient is taking prescription steroids). Prescription steroids called glucocorticoids, like prednisone, are used to treat patients who had a transplant or who have diseases such as rheumatoid arthritis, asthma, or inflammatory bowel disease. Even if the patient is taking the right dose of steroid for their condition, they may develop Cushing’s syndrome.

Cushing’s syndrome can affect many different organs in the body and causes a variety of signs and symptoms. The most common signs of Cushing’s syndrome include “Moon face” (round face appearance), dorsal fat pad or “Buffalo hump”(a mound of fat forms at the base of the neck), central weight gain, increased body hair, thinning skin, acne, easy bruising, leg swelling, purple stretch marks on the abdomen and legs and constantly rosy cheeks. Patients with Cushing’s syndrome may develop diabetes, hypertension, muscle weakness, irregular menstrual cycles and mood changes.

Diagnosis of Cushing’s syndrome is initially made by measuring 24 hour urine cortisol levels or salivary cortisol levels. Patients with confirmed high cortisone levelswill then undergo a low dose dexamethasone suppression test in order to see if the cortisol levels will drop by giving steroid in a pill. ACTH blood level is done to determine the cause of Cushing’s syndrome. If the ACTH level is high or normal, then the cause is either a pituitary tumor (Cushing’s disease) or ectopic ACTH-producing tumor. If the ACTH level is low, then the cause is an adrenal tumor and a CT scan or MRI of the abdomen will be done to see if one or both adrenal glands are involved.

Patients with Cushing’s syndrome caused by an adrenal tumor (adrenal Cushing’s) can usually be cured by removal of either one or both adrenal glands, depending on which adrenal glands are involved. Almost all of these operations can be done using minimally invasive techniques such as laparoscopy. Patients having both adrenal glands removed will need steroid pills for the rest of their lives. Dr Papoulas and his team work closely with endocrinologists to tailor the treatment of each patient and perform all the work-up required prior to any surgical intervention.

Occasionally one of the adrenal glands can enlarge, even ifit is not producing excessive hormones. Sometimes this can just be monitored. However, if it continues to grow in size or becomes too large surgery is recommended to rule out cancer.

Adrenal incidentalomas fall into one of three categories:

In general, tumors that are functional, malignant, and/or large should be removed. Size and appearance on imaging can help assess the risk for  malignancy (adrenocortical cancer) in an adrenal incidentaloma. In general, tumors over 6 cm in size should be removed and tumors over 4 cm in size should be removed if the patient is healthy enough to tolerate the operation. Most adrenal incidentalomas can be removed using minimally invasive techniques such as laparoscopy. Dr Papoulas performs this operation laparoscopically via 3 or 4 tiny incisions. Most patients only require 1 or 2 days of hospital stay.

Adrenocortical carcinoma (ACC) is a very rare cancer that arises from the adrenal gland. It usually grows and spreads to other parts of the body rapidly, however, if caught early enough, ACC is potentially curable. Children tend to have a better prognosis because it is often found early, however since adults rarely have symptoms they are usually not found until the cancer is large and/or has spread to other parts of the body (i.e. metastasized).

Sometimes ACC can produce excessive hormones, especially cortisol. This will cause the signs and symptoms of Cushing’s syndrome. Often, ACC may be diagnosed as an adrenal incidentaloma.

The only known cure for ACC is to complete surgical removal and the best opportunity to do this is at the first operation. Minimally invasive techniques to remove ACC may be possible in some cases, but most require open surgery in order to completely remove both the tumor and a safe margin of healthy tissue. The decision to use a laparoscopic approach is based on many factors and should be discussed with your surgeon. Radical resections including adjacent organs and vessels may be required in case of locally advanced tumors. Dr Papoulas and his team have a great experience treating those patients requiring major complex surgeries.

After the operation, most patients will receive additional therapy such as radiation therapy or chemotherapy. The most common chemotherapy for ACC includes a combination of mitotane, doxorubicin, cisplatin, and/or etoposide.

Adrenalectomy may be recommended when the primary disease is well controlled and the adrenal is the only site of metastatic disease. Surgery could also be considered in the rare situations where the patient is having significant symptoms from a large adrenal tumor, or if a diagnosis needs to be made and the adrenal is the easiest site to perform a biopsy. It is uncommon for metastatic cancer to appear in the adrenal gland before the primary site is known.

Indications for an Adrenalectomy: