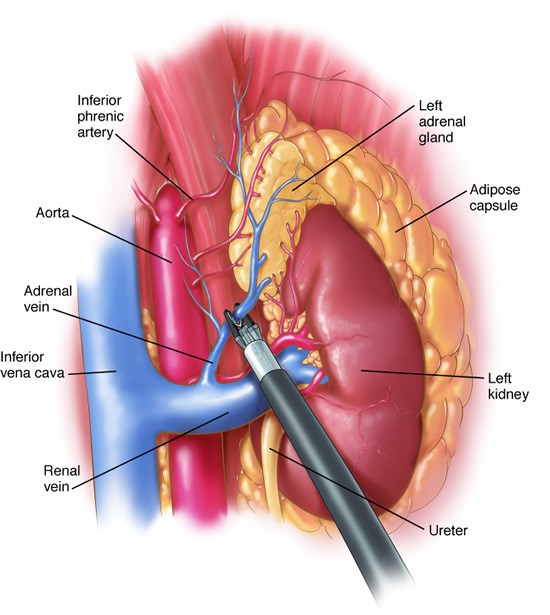 Laparoscopic adrenalectomy is a minimally invasive technique, which provides patients with less discomfort and equivalent results when compared to the larger incision required with traditional open surgery. When compared to conventional open surgery, laparoscopic adrenalectomy has resulted in significantly less post-operative pain, a shorter hospital stay, earlier return to work and daily activities, a more favorable cosmetic result and outcomes identical to that of open surgery.

Laparoscopic adrenalectomy is performed under general anesthesia. The typical length of the operation is 1.5-2 hours. The surgery is performed through 3 or 4 small (1cm) incisions made in the abdomen. A telescope and small instruments are inserted into the abdomen through these keyhole incisions, which allow the surgeon to completely free and dissect the diseased adrenal gland. The adrenal gland is then placed within a plastic bag and removed intact through an extension of one of the existing incision sites. The average length of stay of patients following laparoscopic adrenalectomy is 1.5 days.