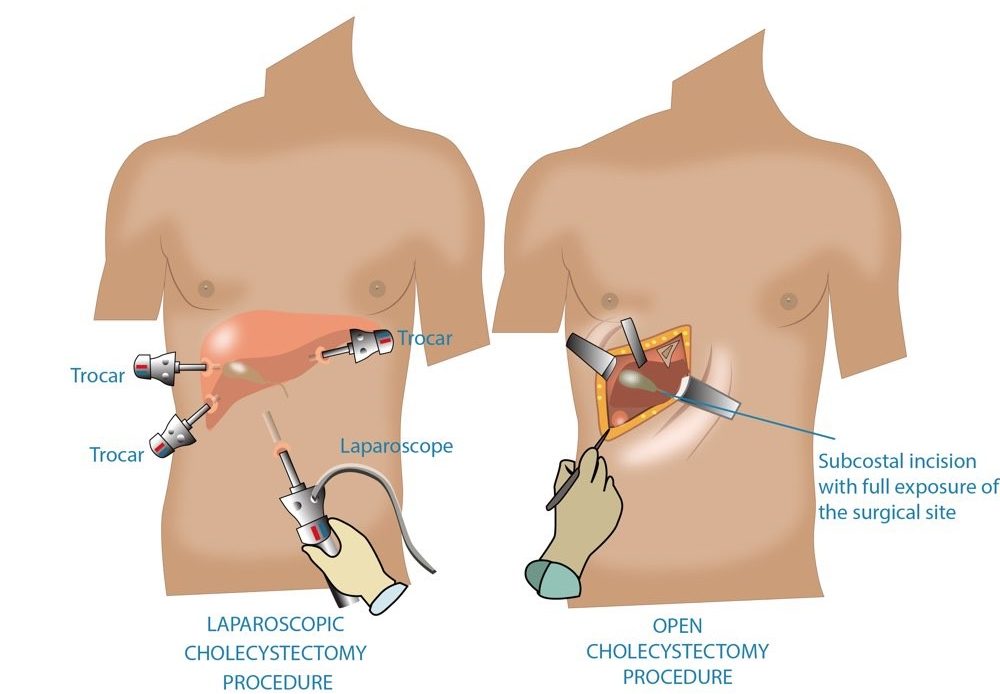 Gallbladder pathology commonly presenting as right upper quadrant abdominal pain/discomfort after meals, nausea, vomiting, and colicky epigastric pain is the most common cause of needing gallbladder removal, also known as cholecystectomy. Laparoscopic cholecystectomy is a very common procedure doneby general surgeons and liver surgeons. This procedure is very well tolerated by patients and it is considered a minor hepatobiliary operation. A small percentage of patients experience temporary diarrhea or loose bowel movements (1-2 weeks after surgery) and long-term side effects of cholecystectomy are almost non-existent.

Acute cholecystitis with severe inflammatory changes around the gallbladder increases the technical difficulty of the gallbladder operation and this can in turn increase the incidence of bile duct injury. When the biliary duct anatomy is not clear, a contrast imaging (fluoroscopic cholangiogram) should be obtained. A failure to recognize the biliary anatomy can lead to a bile duct injury. Therefore, it is important to find a surgeon with adequate experience in performing this operation. Biliary anomaly and aberrant biliary duct branches are not uncommonly found. They are often seen during the laparoscopic cholecystectomy and must be recognized by the operating surgeon to avoid complications.

A small percentage of patients present with jaundice (yellowing of skin and eyes) from a spontaneous gallstone migration into the common bile duct. In this situation, an ERCP (an endoscopic procedure to clear the bile duct) is needed to remove the gallstone prior to performing the laparoscopic cholecystectomy.

After an uneventful laparoscopic cholecystectomy, most patients can be discharged to home after 4-6 hours of observation.  The gallbladder specimen is sent to pathology for a permanent section examination to rule out a potential presence of premalignant or malignant cells within the gallbladder. 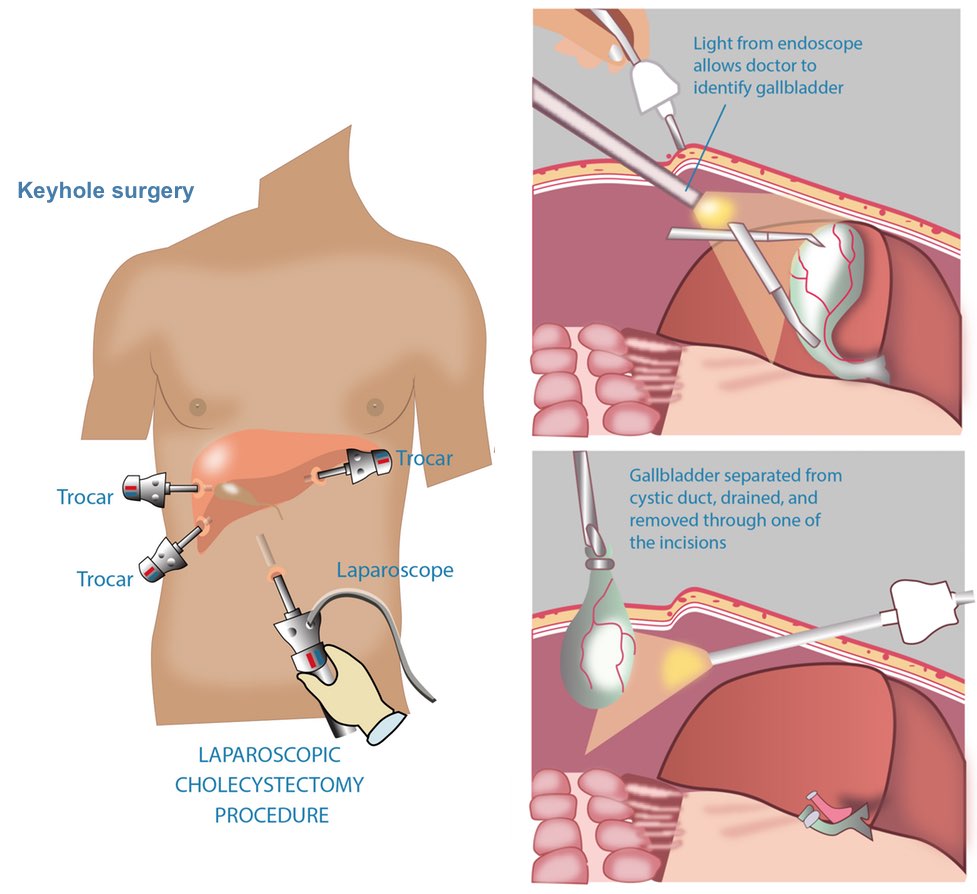 Image 1. Laparoscopic Cholecystectomy is performed through 4 tiny holes. The cystic duct and cystic artery are identified, dissected and divided. The gallbladder is detached from the liver and removed within a bag from one of the holes.

Gallbladder cancer which is either identified on a CT scan as solid mass (+/- liver invasion) or incidentally after a routine laparoscopic cholecystectomy requires a thorough evaluation andspecialized treatment. Once the gallbladder cancer is diagnosed, patient should be referred to a liver surgeon or liver specialist. A liver biopsy of the gallbladder mass should not be performed to avoid spillage of bile, which can lead to a potential peritoneal spread (also known as peritoneal carcinomatosis). Peritoneal carcinomatosis represents a very poor prognosis and it is an absolute contraindication for surgery.

Gallbladder cancer often presents insidiously without abdominal symptoms. Quite rarely, patients present with jaundice (yellowing of eyes and skin) and weight loss. Jaundice is an ominous sign since it indicates tumor involvement/invasion of the extrahepatic biliary ducts. Imaging workup includes a high-quality CT scan and or MRI scan. Surgical resectability is carefully assessed by the liver surgeon based on the imaging findings, taking into consideration the patient’s performance status. Administration of systemic chemotherapy before the surgical liver resection is not commonly performed, unless the gallbladder cancer is considered unresectable or marginally/borderline resectable.

Once confirmed to be resectable, the operation should be planned. The gallbladder cancer surgery includes an enbloc central liver resection removing part of liver segment 4 and 5 and systematic excision of the regional lymph nodes along the bile ducts above/behind the pancreas. Thorough examination of the liver is mandatory to exclude presence of any distant hepatic metastasis from the gallbladder cancer. It is important to remove all the lymphatic tissue and lymph nodes along the area of gallbladder cancer lymphatic drainage, without causing an iatrogenic injury to blood vessels feeding the liver.

During the operation, the gallbladder and the adjacent liver parenchyma are sent to pathology for a frozen section evaluation to confirm negative resection margins. Postoperative chemotherapy may be given according to the staging of the cancer, after approximately 4 weeks following the operation, to optimize long-term oncology outcomes. Radiation therapy is given for patients with positive margins. 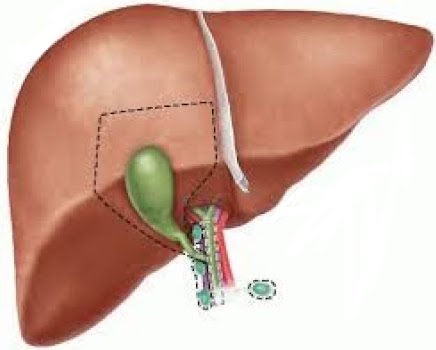 Image 2. Laparoscopic radical cholecystectomy involves the en bloc resection of the gallbladder with the gallbladder bed (segments 4B and 5) together with the hilar lymph nodes. Depending on the extend of the disease, the extra hepatic biliary tree may be also resected.

Intraoperative Cholangiography (IOC) may be indicated in selective patients in order to rule out the presence of choledocholithiasis (stones or sludge in the bile duct) or to delineate the biliary anatomy when this is not clear during surgery. Patients with a clinical history of jaundice, pancreatitis, elevated bilirubin level, abnormal liver function test results, increased amylase or lipase levels or dilated common bile duct on preoperative ultrasonography have increased risk of choledocholithiasis. Ideally, those patients have to undergo further preoperative assessment and evaluation with MRI/MRCP to rule out the presence of bile duct stones. In case of bile duct stones, an ERCP should be performed prior to surgery in order to extract the stones with or without a stent insertion.

Image 3. Laparoscopic Intraoperative Cholangiography (IOC) delineating the anatomy of the biliary tree and ruling out any intraluminal pathology.